Letter From The Publisher – March 2009 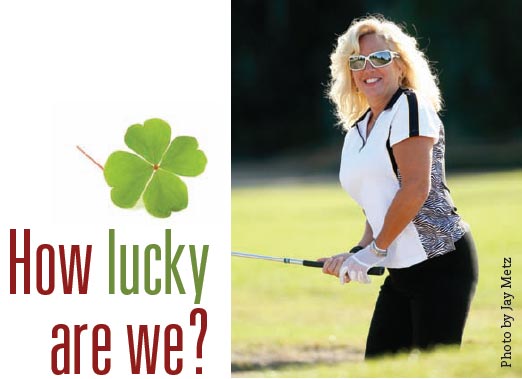 The answer is “Four Leaf Lucky” to use an old Irish Gaelic. Livin’ it up here in The Sunshine State, hosting The Florida Swing while enjoying an economic boost to the golf market during slow times. The other varied range of events that are taking place in the next couple of weeks that we’re involved in like the CA Championship, March 10-15; Transition’s Championship, March 16-22; Ocala Open, March 25-28; Arnold Palmer’s Bayhill Invitational, March 23-29; Festivals of Speed, March 27-28. The luckiest of states can’t boast this gold at the end of a rainbow.

Most of all being lucky enough to really take advantage of the longer days by getting out and playing in the evening while the weather has been so nice.

Golf is stimulating to say the least. Just read the Leader on the Links, page 20, if you don’t believe me. It appears that when the going gets tough the tough play golf. Good news for the game, especially now that Mr. Woods is playing again.

I know some real estate sales people who have had a few rough months lately. Their method of dealing with the down swing is to practice their golf swing. I’m quoting an agent who said, “I shouldn’t stay in the office if no one is buying”. The best thing to do is research the number one amenity on Florida’s Golf Course communities.

They’re pragmatic that way. You know, “Git R Done”. They can’t just wait around like a Maytag repairman; you never know what kind of new home buyers are on the course that day.

The ironic thing about this little story is what happened when his phone rang during the round. He became frustrated and said bloody customer messed up the big “MO’ he had workin’. “Now I have to go show a house this afternoon, Gosh Darn it all!”

We here at FGCM hope that you are all relieving stress on the courses, the range, and can take time to capitalize on the amazing weather that we are so lucky to share with our Northern guests while they’re here.

Please come by our tent at the different venues we are exhibiting at during the month of March and smack us around. We’re used to it and have grown fond of the ritual. My condolences to the Stine family, I’ve known the boys for years and have my own “Charley” stories to share. I’ve also HAD to play golf with Joe on a couple of media trips…..OOPS! I meant had the pleasure of.

It’s not by accident that they are so entrenched in the golf media, they are the “Stine” family.