Letter From The Publisher – March 2007 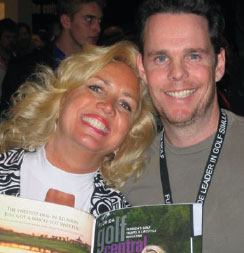 It Don't Mean A Thing

How do you spend your rainy days in Florida? I spend mine cuddled up with a friend and a nice bottle of Pinot Gri’ to watch a movie, unless of course Entourage is on. Entourage is the popular series on HBO that all the hip people are watching. I got the opportunity to meet my favorite character Johnny Drama played by Kevin Dillon at the PGA show. Read more about him on Pg 18.

It is so sweet to have these distinguished events going on here in Florida this time of year. I couldn’t think of any better way to swing into spring...Cause it don’t mean a thing, if you don’t get in to the Swing!

The Florida Swing that is and it’s …better than ever! The “Swing” of events has grown exponentially with more choices than a Chinese buffet. The “Swing” has been overhauled like a Bob Vila project on This Olde House with a new line up for the PGA TOUR, Champions TOUR, LPGA TOUR and now, even the LPGA Legends TOUR.

PODS Championship, March 5-11: The Copperhead Course at the Innisbrook Resort near Tampa will be the site of a PGA TOUR event for the second time in five months.

World Golf Championships-CA Championship, March 19-25: Tiger Woods will be the double defending champion at Doral in this spot previously occupied by…

THE PLAYERS Championship which moves to a May date this year. And then a week later…

And don’t forget about the Boeing Championship in June in Destin… wait…there’s more now for the ladies!
The GINN Open at Reunion in April, and The HANDA Cup – the new LPGA Legends TOUR event at Slammer and Squire in Decemberrrrrr.


Are we the official capital of golf or what!?
Get in to the Swing!