Letter From The Publisher – August 2009 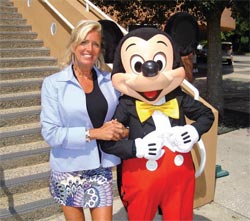 For the past 8 years, I have been headin’ north to South Carolina for the World Amateur Tournament in Myrtle Beach. Hopefully, most of you playas” know that for the past 25 years the event has been held there the last week in August. “Way back when”, when I first learned of this event, there were plenty of Floridians going up there with their mates and golf buddies. This alone was reason enough to go and investigate the extravaganza.

Our own Rick Harris, AKA “Old Reliable”, has respectfully represented us for the past seven of the eight years he has been working with FGCM. He ‘s lucky to be accompanied by his lovely wife, Betty, who, although she does not play the game, she enjoys the festivities at the 19th Hole just the same.

I remember the first couple of times I went up to the World Am., there was some chatter amongst the crowd of cheaters and sandbaggers; and I am not referring to the cool Sandbaggers ladies golf shoes. I believe there were some 5,000 consumer golfers, both men and women, who play on over 100 courses up and down the strand. It will be interesting to see how many qualify for the tournament this year. Rick, Betty, and I will be there to represent yo, but we hope to see you there “live and in living color” !

Speaking of amateurs, a few weeks ago at the North Florida PGA, East Central Chapter, 2009 awards ceremony, I proudly accepted the award for “Amateur of the Year.” The event was held at Disney and sponsored by Nike Golf. Our keynote speaker, also a friend of mine, Adam Barr, host of the Golf Channel, was his extremely entertaining and humorous self.

Although the award was presented to me, it was not representative of any victory, glory, or championship on my part. This award was primarily an acknowledgement to Team Florida Golf Central Magazine for our dedication to “Growing the Game” in the sunshine state.

I was so very honored that such a passionate group of professionals recognized our efforts in making the game more inviting, comfortable and hopefully more fun for anyone and everyone at all playing levels. Thanks to all the Pro’s for welcoming me, from the very beginning, into your pro shops, Country Clubs and events. I appreciate your continued support and encouragement for embracing our unorthodox style of publishing a golf magazine! I have mad respect and was thrilled to be included in the amazing company of professionals that I was in that day. Congrats to all 4 of y ou and my sincere thanks for this recognition.