Duffer Dan and the Undercover Gang at Dunedin Country Club

left the Gang at home this month and went over to Pinellas County to take a walk back in history and visit the Dunedin Country Club, a 1927 Donald Ross classic design that Mr. Ross called “a masterpiece”. Bill Gilkes, the Membership/Marketing Director at the club and a good friend of the magazine, invited me to be one of the first to experience their latest improvements. The greens were enlarged and planted with Ultra Dwarf, the newest generation of Bermuda grass, known as Mini-Verde, the same grass that was used at TPC Sawgrass, the home of the Player’s Championship in their redo. Allen Brissenden GCSAA, the Superintendent at Dunedin, made sure the sprigging of the greens and grow–in were complete before allowing the Duffer and the other invited media to step foot on the 6600 yard championship layout. What an excellent job Allen and his staff did! The greens were superb. PGA professional, John Falcone, was extremely cordial and welcoming and gave me a tour of the clubhouse and history of the former home (1945-1962) of the PGA of America. For those of you who have been to our annual PGA Merchandise Show at the Orange County Convention Center, the original was held in 1954 in the parking lot at Dunedin.

We had an early morning tee time. My playing partners for the day were Dunedin C.C. Treasurer, Bob “Bubba” Bayer, retired Buccaneer punter and ESPN Sports Radio host Mark Royals, and 3 time Bucks Pro-Bowler, retired Center Tony Mayberry. After hitting a bucket of balls on the practice range, Bubba and I went over to the practice green, which is adjacent to the first tee, to test out the mini verde. This grass can tolerate lower mowing heights for a much faster and truer putting surface, plus it holds its color through the winter and does not need any over-seeding. 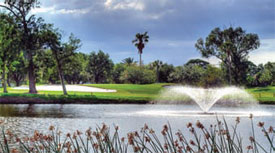 The front nine is across the street from the elegant and historical clubhouse, starting with two dogleg left four pars. The number one handicap hole is #2, at 446 yards from the back tees. Your drive plays downhill to a receptive fairway, but then turns uphill to a well-bunkered smallish green. The fairways are lined with mature oaks and pines that come into play particularly when our two Buccaneer buddies where spraying their drives everywhere but the short grass. The par 3 #6th hole has its own desert in front of it and will be known from this day forward as ‘Dunedin’s Duffer Desert’. Since I was the only one of our group to land in it, I could have used the entire grounds crew to rake my journey to and from my ball. The front has only one 5 par, the 522 yard 7th which doglegs right and downhill to a tight green. One thing most of the greens have openings that allow for run-up shots if you are so inclined. It took me all nine holes to get the feel of the greens, but they are not crowned like Pinehurst #2, another Ross design.

It was Miller time when we reached the tenth tee box, which is adjacent to the clubhouse and pro shop. Bubba made sure we had whatever beverage we wanted to cool off with. After that we forgave him for using those pink tees. Holes 10 through 13 are called the Loop, which play back to the clubhouse and often used to determine the winner of a tie after 18 holes. I don’t know if it was the cold ones or I finally got my putting stroke, but I three putted these four holes, holing out in front of the clubhouse from off the green. Can you guess which nine I liked the most? I must say the back has a little more diversity, including the Curlew Creek, which comes into play on four holes, and a pond on 14 that challenges the big hitters. Tony and Mark both drove it and were a sand wedge to the green while Bubba and I had to just play our normal drives down the fairway and take the long way home.

After one of the most delightful rounds I have played in along time, I was met by Dunedin Country Club President Warren Wylie and had an informative and delicious lunch with Allen, Bill, John and Warren in the Grille Room & Lounge. The Club was the site of the PGA Seniors’ Championship from 1945 till 1962, which led to the formation of what we now know as the highly successful PGA Senior Tour. Some very famous Lady Professionals played a benefit round for the March of Dimes in February of 1947. Babe Zaharais, Louise Suggs, and Peggy Kirk Bell were among them. The hallways and trophy case at Dunedin are like reading a history of golf. LPGA star Brittany Lincicome plays in a Friday shoot out when she is home and is an honorary member.

Dunedin Country Club offers a true country club atmosphere but is actually semi-private. The club offers a full array of social activities with excellent luncheon and dinner menus, banquet facilities, indoor and outdoor dining, fully stocked lounge, and large men’s and women’s locker rooms. There are ample practice areas and Head Pro John Falcone and his staff are available for lessons. John’s daughter is the poster child for the Shriners Hospital 3rd Annual Pro-Am Scramble to played at Dunedin Friday November 16th. Outside play is permitted. Just call the Pro Shop at 727-733-7836 to make your reservation to play the best greens in Tampa Bay.

For information about hosting tournaments or membership contact Bill Gilkes at 727-733-2134, Extension 234 or check out www.DUNEDINCC.com.