The 2007 Ginn OPEN returns to Central Florida this April 9-15 at Ginn Reunion Resort with players competing on a composite layout of TomWatson’s Signature Independence CourseSM and Arnold Palmer’s Signature Legacy CourseSM. Thursday and Friday rounds will be covered by The Golf Channel with live coverage on CBS Sports Saturday and Sunday. Weekly badge holders will have access to Saturday evening entertainmentas well as the Reunion Clubhouse and tournament all week. All tickets include parking and children under 17 are admitted free with a ticketed adult.
In the early morning hours of Friday, February 2, 2007, Central Florida was rocked with a series of deadly tornadoes leaving a path of destruction in its wake. One of the hallmark of Ginn Resortsis giving back to the communities in which the company develops in. The Ginn OPEN andthe American Red Cross of Central Florida have partnered together to help raise funds for those affected by the tornadoes through advanced ticket sales to the Ginn OPEN. The difference between the advanced ticket sale price and the walk-up pricing will automatically go towards supporting the American Red Cross’ tornado relief program.
In April of 2006 Ginn Resorts returned the LPGA to Central Florida with the Ginn OPEN. More than 50,000 spectators came to Ginn Reunion Resort to watch the LPGA’s top golfers compete for the $2.5 million purse and Dale Chihuly designed Macchia trophy. The 2006 Ginn OPEN was highlighted by sponsor exemption player 13-year-old Dakoda Dowd from Palm Harbor, FL, who played in her first LGPAevent to fulfill her mother Kelly Jo Dowd’s wish. Kelly Jo learned in early 2006 that the breast cancer she beat three years ago had returned, invading more of her body and leaving her terminally ill. Dakoda and Kelly Jo’s story touched lives of golf enthusiasts around the world and LGPAplayers alike.
“The inaugural Ginn OPEN was a world-class event. From the hospitality extended to the players to the accommodations and the course conditioning, no detail was unattended,” LPGA Commissioner Carolyn Bivens said. “The Ginn OPEN set a very high standard for first-year events and will be a great example for future inaugural LPGA tournaments.We enjoyed our initial venture with Bobby Ginn and Ginn Resorts and are looking forward to many more.”
Defending champion Mi Hyun Kim will battle the top female golfers in the world, including number one ranked Annika Sorenstam, for this year’s $2.6 million purse, one of the largest purses on tour. Kim clenched the 2006 title of the inaugural Ginn OPEN by beating hard-charging Lorena Ochoa and KarrieWebb by two shots. The win was the sixth of Kim’s career and her first since 2002, snapping a winless streak that spanned 103 tournaments.
“I was so nervous to play because I did not have a win in three or four years,” said Kim. “If I lost today [April 30, 2006], maybe I never win again, so this win is big for me.”
The success of the Ginn OPEN has led Ginn Resorts to create a new division Ginn Sports Entertainment which handles the marketing and management of the company’s professional golf tournaments and NASCAR enterprises. Golf and entertainment has been a strong staple to Ginn Resorts,” said Ginn. “With the formation of this division, we now look to build a sports franchise that provides a memorable year-round event experience for our members and guests and national brand awareness for our resorts.
Tickets are currently available online at ginnopen.com or by calling 877-GINN-TIX. 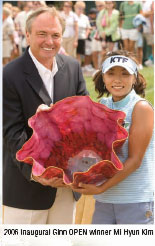 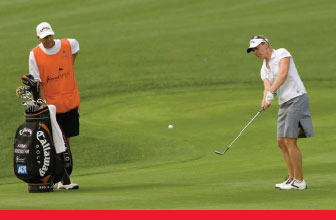 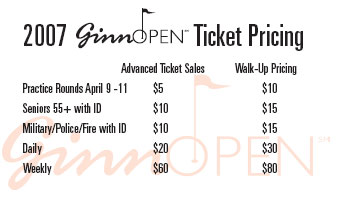 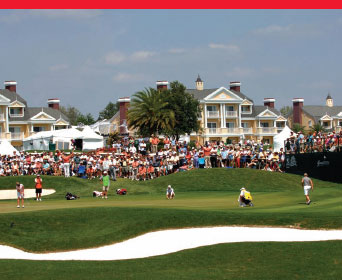