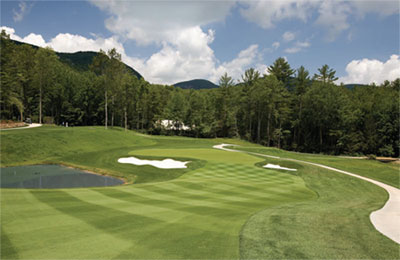 People have come to North Carolina’s Lake Toxaway for decades to enjoy the serenity of a lakeside estate or to relax at the luxurious Greystone Inn. Starting next month, there will be a new amenity in the Lake Toxaway portfolio – world class golf. Lake Toxaway Country Club is on the precipice of unveiling the next golf masterpiece in the mountains of North Carolina. When it debuts Aug. 1, this gorgeous par-71 championship layout will be the first original design by acclaimed restoration architect Kris W. Spence. Spence, who built his reputation restoring Donald Ross courses, has created a totally new layout in the footprint of the club’s original course, which opened in the 1960s. He was asked to wipe the canvas clean and craft a course as special as its surroundings. Early reviews suggest he was up to the task. “What Kris has done on this piece of property is nothing short of amazing,” says head pro Lou Biago. “Those of us who have been here for a long time still aren’t sure how he did it.” 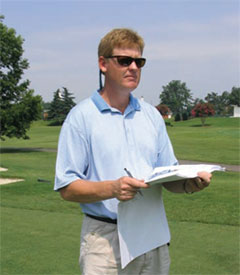 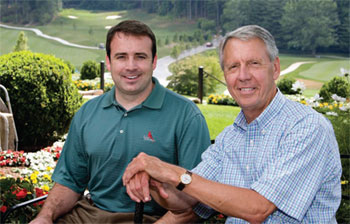 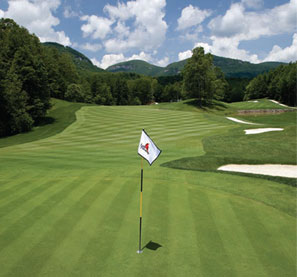 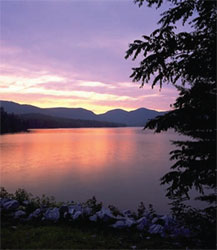 Spence says it was a challenge crafting an original design in the existing footprint, so he spent a lot time walking the hills and valleys of the mountain property, studying land forms and considering multiple angles of play. The result is an excellent layout that in some cases moves forward by going backwards. For example, the new 12th hole was created by reversing the old seventh hole, while the new 16th and 17th holes came to life in the inverted footprint of the old third hole.
“He took two of the worst holes on the golf course and turned them into three spectacular holes by going in reverse,” Biago says. Spence also opened corridors that were once claustrophobic, exposing vistas of the Blue Ridge Mountains that hadn’t been seen in years. “We now have,” says Biago, “a more playable golf course that incorporates the majestic views of the mountains and the lake.” For owner Reg Heinitsh Jr., this $9 million project was about balance and timing. Heinitsh wanted to bring the course into balance with Lake Toxaway’s other fine offerings, and he saw an opportunity to capitalize on the popularity of a rising star in golf architecture.
“With the new golf course, all of our amenities will be in balance,” Heinitsh says. “The lake has always been sensational. Now the golf course will be sensational too.”
Heinitsh, who hired Tom Fazio to design the club’s expansive practice facility a few years ago, had several high-profile architects in mind for this project. But when the moment arrived to make a selection, he sensed the timing was right for Spence’s first signature design.
That timing got even better this spring as the PGA Tour chose Spence’s restorationof Sedgefield Country Club in Greensboro N.C., to become the host venue for the Tour’s Wyndham Championship.
“We really caught Kris at the perfect stage in his career,” explains Heinitsh. “His passion for the history of golf architecture and Donald Ross is unsurpassed. He likes nothing better than rummaging through old vaults in clubhouses looking for original Donald Ross plans and sketches. He’s like an archeologist.” Spence incorporates many concepts of classic architecture into the layout at Lake Toxaway Country Club. Much like a Donald Ross design, the true test is around the greens. There are plenty of swales, hollows and grass-faced bunkers to deal with.
The putting surfaces, on first glance, appear relatively flat and straightforward. However, deeper study reveals subtle spines and movements that require the player to show some ability with the putter. Simply reaching the green in regulation is no guarantee of par. The course is not overly long, measuring about 6,600 yards from the back tees. Lake Toxaway president David Dew says Spence was careful to create a course that accommodates golfers of various skill levels.
“When I look at the course, I see an excellent layout by all standards,” says Dew. “It’s challenging for low handicap golfers and fun for the medium to high handicap golfers. And it’s placed within a natural setting that may be unsurpassed on the East Coast.”

Heinitsh and Dew expect the new course to increase demand across all areas of the Lake Toxaway Co. portfolio, from real estate sales and vacation rentals to resort packages at the four-diamond Greystone Inn.
“There is certainly a buzz. We’re fielding a lot of inquiries,” Dew says. “Reg had a vision of what this project would do for Lake Toxaway and that’s coming to fruition. We couldn’t be more pleased with the result.” For information on real estate offerings, vacation rentals or resort packages, call Lake Toxaway Company at (800) 443-0694, or visit www.laketoxaway.com.