Tail driving to be the most coveted brand for lady sports enthusiasts. 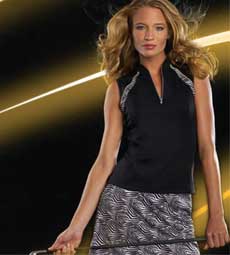 It all started one unsuspecting day in 1974, when Cheryl Singer, bored with her tennis whites, got inspired and bought a bolt of denim. She made a quick sketch, handed it to her dressmaker, and two days later picked up the denim tennis skirt. She sewed on some appliques-a heart and “love” — and got dressed for her regular Saturday doubles match. “It created a nice buzz,” recalls Cheryl, who never dreamed that 32 years later she and brother Andy would be co-presidents of this “hobby business” that became Tail Inc. Since the day that skirt debuted, the company has stood firmly as the leading specialty apparel maker for tennis and golf. Expansion to golf comes naturally
“One shop owner suggested lengthening the skirt and adding a panty to make a golf skirt,” says Cheryl of the instant that Tail Golf was born. It proved to be a smart move. “In the first five years we kept doubling sales.”

Andy says that Tail's dominance in the golf arena worked just as it had in tennis: “We broke away from traditional golf clothes that were heavy with appliques and very cutesy. We did a more tailored, active look," explains Andy. "There is as much golf history as tennis in the company. Golf is a large part of our business today.” 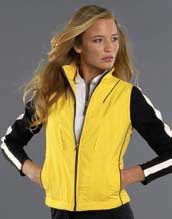 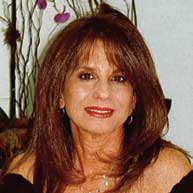 It’s no wonder that Tail has led the charge of outfitting the active modern woman for three decades — after all, the company was founded, and continues to be led, by one of them. Three decades later Cheryl is still making her designs into reality and putting her formal education to work.
There’s more than one ‘best part’ to this job, as whimsy made way to a dream and allowed her to work side-by-side with her son, Brad, of whom she says, “I’ve never seen anyone with the passion and talent he’s got. He’s got a vision for Tail. I want him to carry the name forward, yet there’s something in me that says ‘you’ll always be involved.’”
Brad Singer, , Vice President of Sales and Marketing, brings an appreciation for Tail’s rich catalog of design, and a zest for expanding Tail’s impact for the future. His role in the Andy. "There is as much golf history as tennis in the company. Golf is a large part of our business today.”
Tail driving to be the most coveted brand for lady sports enthusiasts. launch of the Tail Tech label for golf and the expansion of Tail Tech Tennis into a cardio lifestyle, was a significant step to reaching the growing trend of active women for whom fitness is a way of life. Like his mother and uncle, Brad’s been training for a life in fashion since he could walk. He’s now involved in all aspects of Tail and looks to be the catalyst in expanding the Tail brand into more than just a tennis and golf apparel business. The new mission for the company will be to increase enjoyment and well being of sports enthusiasts through comfortable, fashionalble apparel and accessories.
“My grandfather’s advice was gain some experience elsewhere before devoting myself to Tail,” says Brad. “Growing up in the apparel business, fashion was in my blood from the get-go.”