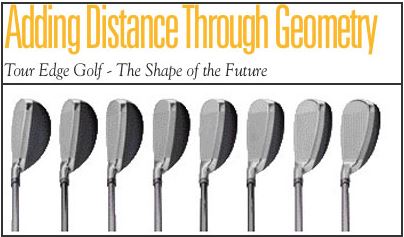 The shape of the golf business is ever changing. Over the last few years companies have been acquired, mergers have taken place and some have even folded. Through these somewhat cannibalistic times some companies have prospered, even thrived. One such company is Tour Edge Golf. This once small company has mushroomed into a solid player in the equipment category. According to Golf Datatech, Tour Edge occupies a top 10 market share in every single club category. Known previously for delivering outstanding performance in equipment at value pricing, over the last couple of years the company has introduced its high end line of Exotics clubs. Equipment sales at both divisions have skyrocketed during this time of stagnation in the golf business, essentially validating the fact that Tour Edge and Exotics products deliver performance and innovation plus exceptional value at the same time. Just like the biggest equipment companies, Tour Edge innovation constantly introduces new products in all club categories. Two new products shaping the future are the GeoMax driver and Bazooka JMAX QL Iron-Woods.

Maximizing Performance Through Geometry
Everyone knows, the shortest distance between two points is a straight line. But for many golfers hitting a driver straight is a constant struggle. According to Tour Edge, problem solved. Now golfers can hit straighter and longer drives with the GeoMax. Designed to maximize the moment of inertia (MOI) through geometry, the GeoMax eliminates twisting without a funny looking shape. Its to-the-limit breadth ratio, the measurement of the face from heel to toe divided by the distance from face to back ranges as high as .974, which is at the upper edge of the USGA scale. This ratio helps increase forgiveness plus dramatically increases the MOI as compared to traditional drivers. Coming in at a whopping 5,000 g/cm2, the GeoMax ’s MOI is higher than Nike’s Sasquatch Sumo (4,950 g/cm2) and Adams Insight BUL (4,950 g/cm2). Further enhancing the MOI, the GeoMax’s center of gravity is moved deeper and lower via a 20-gram tungsten weight in the rear of the sole, eliminating the need for the awkward looking square shape.

David Glod, president and founder of Tour Edge Golf states, “GeoMax is designed to rival and exceed the performance of square shaped drivers but with an eye-appealing design and a classic sound not found in the competition ’s composite drivers. It delivers one of the highest MOI’s in a driver, delivering remarkable forgiveness, which will keep you in the fairway and out of the rough. ” Tour Edge says GeoMax’s 460cc lightweight totally titanium construction enhances trampoline effect off the face for longer drives. While enhancing distance and control, the GeoMax Grafalloy shaft also increases tip release power for a quicker, hotter launch.

Bazooka QL Hybrid - Golf Made Easy
I believe that today's hybrids make playing golf easier than ever before. Even Tour players are using them in ever-increasing numbers. The new Bazooka JMAX QL is easy to hit from any lie. The deep CG, a byproduct of the heavy tungsten sole weight, produces an extremely high moment of inertia, the club ’s ability to resist twisting, delivering exceptional forgiveness. Player and mechanical testing provided by Tour Edge shows the Bazooka QL is not only forgiving but exceptionally long. As a result of the QL ’s ultra-hot face, strong lofts and lower spin-rate, Glod believes most golfers should gain an extra 10 yards over their current irons.

QL’s longer clubs are more wood-like, with a heavier, wider sole. As the set progresses to the scoring clubs, the narrowing soles deliver a more traditional iron look. The progressive sole width moves the CG from a low, deep position in the long irons to a shallow, higher position in the scoring irons producing the ideal trajectory for each club in the set. Another innovative feature added to the QL is bulge-and-roll face technology on the 1-4 Iron-Woods. In a conversation with Tour Edge public relations director Jay Hubbard, he stated, “The long irons are the most difficult to hit. This allows them to react properly when the head rotates around its CG on off-center hits. ” Hubbard goes on to explain, “Bulge-and-roll technology drives the ball in the opposite direction from the curvature caused by the ball's spin, bringing your miss-hits back to the target line for maximum forgiveness. ”

QL Iron-Woods blend nicely as a composite set with standard QL irons. As opposed to other combination sets, I saw the top line of the Iron-Woods and the irons as more consistent. That onsistency breeds confidence when standing over either club. QL clubs can be purchased individually or as a complete set. The QL Iron-Woods are powered by an exclusive Aldila shaft design using their NVS platform, combining a low kick-point with a more responsive tip design. The result is a shaft that launches long, high iron shots.

PGA Tour Partners Testing
Golfers were asked to test a QL 6-Iron-Wood. While the test study has not been totally completed (just under 50% of the testers have responded), player response has been extraordinarily positive. According to Product Test Editor Ross Tanner, the approval rating so far is 100%. Virtually every single responder would recommend the club and every one felt that at a price of $99.99 for graphite and $89.99 for steel, the QL Iron- Wood is a good value. All but one of the responders said the club would remain in their bags. The one naysayer remarked that while he wasn't going to keep the six in his bag, he liked the club so much he wanted to buy the 3, 4 and 5 Iron-Woods. They would stay in his bag!

Product tester Lawrence Thompson wrote, "The ball jumps off the club face with a high trajectory. It's easy to hit." Derek Moffett highly recommends the QL Iron-Wood adding, "I love the way it feels impact. The balls fly higher and land soft on the green. I can shape shots better with the JMax QL Iron-Wood." He goes on to say that he likes the club so much he's going to purchase three additional clubs.

All Tour Edge products come with a lifetime warranty. Most of the clubs in my bag are Tour Edge. I tried them myself, maybe you should too.
For additional information, visit www.touredge.com or call 800-515-3343.