Some of the best golf in the world is played on the Champions Tour, and many of the top players on the men ’s 50-and-over circuit are sure to participate in the inaugural playing of The Ginn Championship at Hammock Beach. That ’s partially because players won’t be able to resist the brand-new tournament’s whopping $2.5 million purse, $375,000 of which goes to the winner.

Scheduled to be played March 26-April 1 at Ginn Resorts’ newly acquired, oceanfront Ocean Hammock Resort in Palm Coast, Fla., the tournament offers a purse that eclipses everything but the major championships on the 2007 schedule. 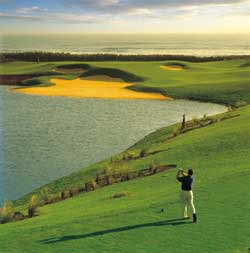 “This tournament is a prime example of Ginn’s penchant for ‘going big,’“ said Tournament Director John Subers. “We have the best players on the Champions Tour playing one of the best courses in Florida for one of the biggest purses on Tour. Without a doubt, the inaugural Ginn Championship at Hammock Beach will blow both players and fans away. ”

At press time, 38 of the top 40 players on the 2006 Champions Tour money list have committed to play at Hammock Beach, including Jay Haas, who won both the money title and the Charles Schwab Cup as he took home four tournament titles and put together an astounding 16 top-10 finishes and $2,420,227 in 21 starts.

Charles Schwab Cup Championship winner Jim Thorpe has also committed, as have consummate Champions Tour pros Gil Morgan, Lee Trevino and Hale Irwin, who leads the all-time Champions Tour money list with more than $23 million. Mark O ’Meara, who shocked the world when he won both the 1998 Masters and British Open as a 41 year old, turned 50 in January and will also play, as will fellow youngster Fred Funk, who recently won the Turtle Bay Championship by a record-breaking 11 shots.

Ginn Resorts acquired the aptly-named Ocean Hammock Golf Club Jan. 3 as a part of the Ocean Hammock Resort. Shifting the tournament from Watson ’s Conservatory to the 7,201-yard, par-72 Ocean Hammock Golf Club in late January, Ginn Resorts retained not only a world-class test for professional golfers but ensured a breathtaking scene to host the Ginn Championship. Eight holes overlook the Atlantic Ocean on the only true oceanfront course to open in Florida in more than 70 years.

In his design, Jack Nicklaus maintained the elevated mounds of scrub oak and native brush, called “hammocks,” to create natural ocean barriers, and he used native coquina sand to mold the distinctive cinnamon-colored bunkers. Six of Ocean Hammock ’s holes are actually on the Atlantic Ocean, while the remaining wind through unspoiled wetlands and past sparkling lakes. The last four holes of the course have been nicknamed the “Bear’s Claw” and are considered to be among the most memorable finishing holes anywhere.

When it opened in 2000, Ocean Hammock Golf Club quickly earned accolades from professionals and amateurs alike. Golf Magazine deemed Ocean Hammock among the “Top 10 New Courses You Can Play,” in addition to Silver Medal Resort honors.