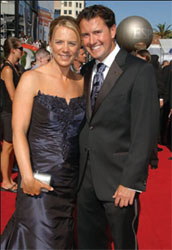 ORLANDO– LPGA Hall of Fame golfer Annika Sorenstam and her boyfriend of two years, Mike McGee, were engaged on Saturday morning at their home in Orlando, Florida. They announced the news on Annika’s website, www.annikasorenstam.com.
“What a lovely surprise!” Annika said. “I’m as happy as I can be.” McGee added, “I’ve been carrying the ring around for a week, and it just seemed like the right time this morning. She was relaxing peacefully at home with her cats and I know that’s when she is most content.”
No plans have been made yet for a wedding date.
McGee, the son of former PGA TOUR golfer Jerry McGee, has served as Managing Director for the ANNIKA brand of businesses since Dec. 2006, when he relocated to Orlando.
Annika is the greatest female golfer of our generation, and often regarded as the best player in LPGA history. Her prestigious list of accomplishments includes her 2003 induction into the LPGA and World Golf Halls of Fame, ten Major Championships, 85 worldwide professional victories, eight LPGA Player of the Year Awards, and participation on seven Solheim Cup teams. Annika has worked hard on her off-the-course businesses, which include the ANNIKA Academy, the ANNIKA Foundation, the ANNIKA Collection with Cutter & Buck, numerous golf course design projects, tournaments she hosts on both the LPGA and Ladies European Tours and her website.

JACKSONVILLE BEACH, FL– Florida’s First Coast of Golf, a not for profit corporation responsible for marketing Northeast Florida as a golf vacation destination, has been named a finalist in this year’s VISIT FLORIDA Flagler Awards competition.
Sponsored by VISIT FLORIDA and the Florida Commission on Tourism, the Flagler Awards program acknowledges the outstanding marketing achievements of the state’s tourism-related businesses, destinations, attractions, and other entities. Tourism marketing experts from across the United States judge the more than 200 entries in 15 categories.
“It’s very gratifying to have your efforts recognized by your peers,” explained David Reese, President, Florida’s First Coast of Golf. “I am very grateful for the hard work that our team put in to develop successful programs that are producing fantastic business results.”
Florida’s First Coast of Golf members include resorts, hotels, golf courses, convention & visitors bureaus and attractions from Amelia Island, Jacksonville, Clay County, St. Augustine, Ponte Vedra Beach, and Flagler County. 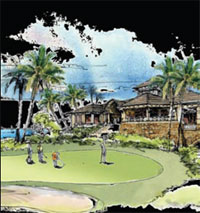