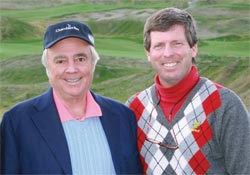 And even in a challenging domestic market, RTJ II expects to open several new courses in the US in 2009 and 2010, including such much-heralded projects as The Patriot Course, in Oklahoma; Sequoyah National, for the Eastern Band Cherokee Indians, in North Carolina; Hickory Stick, outside Niagara Falls, NY; and others. The firm’s architects are also working on a number of renovation projects across the globe, including former World Cup host Princeville Makai, on Hawaii’s Kauai; Makena South, on Maui; and Australian PGA Championship host Hyatt Coolum.

Chairman and Master Architect Robert Trent Jones, Jr. attributes the company’s on-going success—even in the most challenging of times— to what he calls its “cultural agility and financial flexibility.” Jones defines these as an ability to address the cultural vagaries and unique contexts surrounding the game of golf in different parts of the world while also adjusting to economic conditions in each locale.

With headquarters in Palo Alto, Calif., Robert Trent Jones II, Golf Course Architects (RTJ II) is the preeminent golf design firm worldwide. For additional information contact the firm at +1 650-475-0329 or on the website at www.rtj2.com. 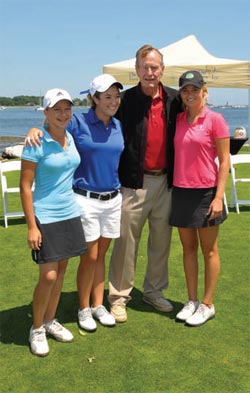 “President and Mrs. Bush were very nice, and you could tell they were excited to be here. They made us laugh and wished us luck in the qualifying process. It was truly an amazing experience!” said Natalie Bodnar from The First Tee of the Tri-Valley (Pleasanton, CA).

Thirty-nine girls from The First Tee Chapters across the country are competing this week for 22 spots to play in the Walmart First Tee Open at Pebble Beach, an official Champions Tour event that takes place this summer during Labor Day weekend. A similar selection process for 84 boys will take place next week, July 14-18, in Rogers, Ark. Of the 78 juniors that will participate in this year’s unique tournament, 70 will be chosen from these two selection events.

“We are delighted President and Barbara Bush have again taken the time to visit with the young people participating in our programs,” said Joe Louis Barrow, Jr., chief executive officer of The First Tee. “They have been very giving of their time over the years. Their words of encouragement will serve to inspire the impressive group of young ladies taking part in this week’s activities.”

AUSTIN, TX,– Golfsmith is giving away what golfers want the most ñ a round of golf at a local course. Golfsmith International Holdings, Inc. (NASDAQ: GOLF) announced that starting today it is giving away 25,000 rounds of golf with any purchase of $125 or more in all of its 74 retail locations across the country. The nationwide promotion is the largest of its kind and follows the success of Golfsmithís free golf and free lessons promotions earlier this year.

“Golfers love new golf equipment and they definitely love to get out and play” said Martin Hanaka, president and CEO of Golfsmith. “Despite the challenging economic climate, the number of rounds played in the U.S. this year equals last year, which clearly shows that golfers continue to support the game through their participation. With this new promotion we are giving them exactly what they want ñ great new products, great values and now free golf from our network of great golf courses throughout the country. And it’s only at Golfsmith.”

In May Golfsmith gave away 20,000 rounds of golf. Based on customer and golf course partner feedback Golfsmith decided not only to do it again, but to increase the number of free rounds for customers. The promotion not only provides great value to customers, but also provides local courses with qualified customers. And those customers that receive a free round of golf bring their paying friends along with them to the course to fill out their foursome.

Guests that shop at Golfsmith’s retail store locations across the country beginning Thursday August 6 and make a purchase of $125 or more will qualify for a free round of golf voucher from a local golf course participating in the program. Quantities vary by store and are on a first come, first served basis only.