The brand new Ginn Resorts Airship is appearing weekly in the skies above Ginn communities and events. The airship is 178 feet long, 55 feet high and 46 feet wide, and it’s capable of reaching speeds of 35 mph and cruising at 25 mph.
Outfitted with a high-resolution LED screen 30 ft. tall and 70 ft. wide— the largest and most advanced TV screen capable of flight— it’s the first of its kind in North America.
The oversized “Skyscreen” is capable of broadcasting TV-quality images from 1,500 feet above the ground. The sky’s the limit for broadcasting capabilities— the screen can show commercials, movie trailers, music videos, text messaging and instant replays at sporting events.
The airship’s primary goal is to increase awareness of Ginn Resorts, a privately-held resort development and hospitality company specializing in exclusive leisure lifestyle and vacation destination communities. It will take to the sky at NASCAR events where the Ginn Racing team is competing as well the company’s LPGA Tour and PGA Champions Tour golf events.
Although there are less than 30 blimps in the entire world today, this type of aircraft has a rich 200-year history. In 1852, Henri Giffard built the first powered airship, which consisted of a 143-ft long, cigar-shaped, gas-filled bag with a propeller, powered by a three-horsepower steam engine. Later, in 1900, Count Ferdinand von Zeppelin of Germany invented the first rigid airship. Airships are called lighter-than-air (LTA) craft because to generate lift, they use gases that are lighter than air. While these lifting capacities might not seem like much, airships carry incredibly large volumes of gas— up to hundreds of thousands of cubic feet. 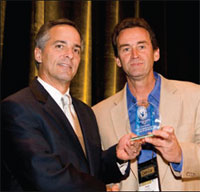 NAPLES, FL– The National Golf Course Owners Association has named The Club at Mediterra as its 2006 Florida Course of the Year. The Course of the Year award is presented to an NGCOA member facility with exceptional quality, superior management, and outstanding contributions to the community and significant contributions to thecommunity and significant contributions to the game of golf. The award was presented at the NGCOA national conference in Anaheim, Calif. NGCOA is the leading authority on the business of golf course ownership and management.This recognition from NGCOA is a tremendous honor for our members and our staff,” said Joey Garon, vice president of operations for Bonita Bay Group and vice president of New Leaf, the company’s amenities management division. “Mediterra is a spectacular club with two fabulous Faziodesigned courses, beautiful vistas of lakes and nature preserves and an extraordinary clubhouse. But it is the enthusiasm and commitment of our staff that really makes the difference. Our General Manager Michael Seabrook, Director of Golf Bob Byrnes and Golf Course Superintendent Scott Whorrall lead an extremely dedicated team of professionals, and we are thrilled that their contributions are being recognized.”
In the past three months, Mediterra has received some of golf’s greatest honors including being named one of America’s top 100 private country clubs by the Club Leaders Forum, being recognized as one of America’s 100 Premier Properties by LINKS Magazine, being listed as one of the nation’s Best Residential Courses by Golfweek magazine and being included on Travel & Leisure Golf magazine’s list of America’s Top 100 Communities.
For additional information call toll free (800) 775-3560, or visit the Web site at www.mediterranaples.com.

TAMPA, FL– Officials of the Outback Steakhouse Pro-Am and the Champions Tour, today announced a change in the schedule for tournament week. The 2008 Outback Steakhouse Pro-Am will move from its traditional mid-February date to the week of April 14-20, 2008.
The 2008 Outback Steakhouse Pro-Am will immediately follow The Masters, traditionally an open week for the Champions Tour and will take advantage of Daylight Savings Time, which will provide additional daylight playing time for the 76-team field of Champions Tour professionals, celebrities and amateurs. “April is a perfect time for us,” said Amy Hawk, tournament director for the Outback Steakhouse Pro-Am. “Not only are the days longer, which helps with the time required for our pro-am format, but we typically have our maximum “golf” weather in April. The crowds should respond even more passionately to these changes,” Hawk added.
Moving the date to April also provides some “separation” from the celebrity proam events that are bunched together in the early portion of the PGA TOUR schedule (Bob Hope Chrysler Classic and AT&T Pebble Beach National Pro-Am). “It will also give the celebrities we have been courting, some breathing room in their commitments, hopefully increasing the chances of our landing some additional ‘big’ names in the future,” Hawk concluded.

For volunteer and ticket information please call the tournament office at 813-265-GOLF or visit www.outbackproam.com.